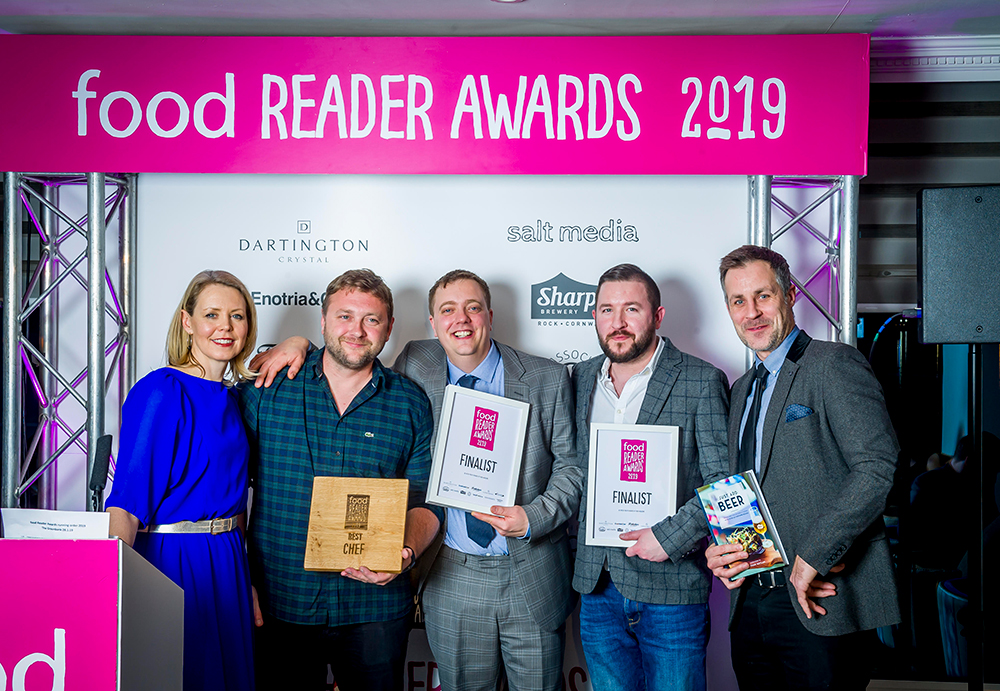 Rock Salt Café has joined the likes of Michelin-starred Michale Caines’ Lympstone Manor, Mokoko and The Wrecking Coast Distillery as one of the winners in food Reader Awards 2019.

Dave, chef and owner, was invited to the awards ceremony at The Greenbank Hotel, Falmouth, on January 28 where he was thrilled to pick up the accolade of Best Chef in what is one of the largest and most highly acclaimed food awards in the South West.

The awards were launched by Salt Media in 2012 through its publication food Magazine, with the aim of celebrating the very best independent restaurants, cafes, pubs, chefs, hotels, producers, retailers and cookery schools in the South West.

The voters are readers of food Magazine and www.food-mag.co.uk, and this year saw 25,000 individual votes cast across the 12 categories.

Dave said: “It was such a great honour to win! It felt like all the hard work since starting up Rock Salt eight years ago and then Salumi, had been appreciated by our lovely customers. I’m so grateful to everyone who voted.”

This is Rock Salt’s second time win, who previously won Best Restaurant in 2017. The restaurant also holds two AA rosettes, is featured in the Good Food Guide publication and has had mentions in the Sunday Times Cheap Eats, Lonely Planet Guide and the Sunday Telegraph’s Stella magazine.

food magazine editor Jo Rees said, “Dave Jenkins from Rock Salt Cafe and all the finalists exemplify the leading, creative and groundbreaking food and drink businesses we have in the South West. It was a fabulous evening and we’re thrilled that Dave will now join our list of previous winners which includes Nathan Outlaw, Hugh Fearnley-Whittingstall, Peter Sanchez-Iglesias, Rodda’s Cornish Cream, and Ashburton Cookery School.”

The coastal feast on the awards night was hosted by one of Salt Media’s founding directors, Jo Rees, along with Nick Hodges, executive chef at The Greenbank and sister hotel, The Alverton in Truro.

The team at The Greenbank treated guests to a sumptuous supper of paupiette of megrim sole, crab rosti and samphire shrimp, followed by Nanteague Farm seared beef fillet and glazed short rib. The meal was accompanied by beers from Sharp’s Brewery, and a wine flight courtesy of Enotria & Coe. Petis fours were served with The Wrecking Coast Distillery’s Honey Sloe Gin.

Saturday
9am til late

Rock Salt was recently listed in The Sunday Times Top Restaurants for £20 a head as part of the Best 130 places in Britain for cheap eats.

We are offering half price sparkling wines for customers who book a table to dine with us on a Friday for dinner.

You know the feeling, why is it like that? That’s how it all started, why can’t I have a great breakfast at 2pm?

We are very pleased to announce that we have won the amazing Good Food Award which recognises the hard working teams who strive for culinary excellence for 2020.

We are offering a series of Pan Asian nights- 5 courses for £39.95 pp featuring cuisines from Malaysia, Thailand, Japan and India.

The next one will be the evening of Thursday 24th September 2020.

Steak night specials 2 courses from only £20!

“Not only is the food at this brasserie a guaranteed hit on Instagram (beautiful plating; flowers and micro-herbs aplenty), it’s also delicious. “

We are very pleased to announce that we have won the amazing award of being the ‘Best Restaurant’ in the South West by the readers of Food Magazine.